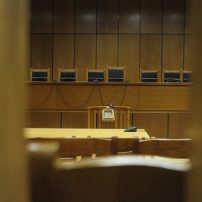 Life imprisonment for involvement in an illegal organization. Absence of a basic witness and inability of the accused to investigate and challenge his allegations in the criminal proceedings. Violation of the right of the accused to examine the witness.

The applicant, Suat Daştan, is a Turkish national who was born in 1975 and is serving a life sentence in Turkey following his conviction in 2006 of carrying out a bomb attack in Tunceli. The case concerned his allegation that his criminal trial had been unfair.

Mr Daştan was arrested in August 2004 on suspicion of membership of an illegal organisation, namely the PKK (the Kurdistan Workers’ Party). He was later accused of being involved in two attacks which had injured soldiers in October and November 2003. Throughout the criminal proceedings Mr Daştan confirmed that he was a member of the PKK, but repeatedly denied his involvement in any attacks. When convicting him in May 2006 the trial court essentially relied on witness statements from six suspects in other criminal proceedings concerning the PKK. One of those witnesses stated that the attack in October 2003 had been carried out by a man with the code name “Hamza”, and whom he identified as Mr Daştan when testifying before the trial court. He did not however personally witness the attack or have knowledge of Mr Daştan’s illegal activities for the PKK. The sixth witness, D.T., who gave testimony before another court, stated that he had heard that Mr Daştan had placed and set off the mines causing the explosion in October 2003. Mr Daştan asked the trial court to hear D.T. in person, but his request was rejected as it considered that D.T.’s statement before another court was sufficient. His conviction was upheld by the Court of Cassation in February 2008.

Relying in particular on Article 6 §§ 1 and 3 (d) (right to a fair trial / right to obtain attendance and examination of witnesses), Mr Daştan notably alleged that the proceedings against him had been unfair, because he had been denied the opportunity to question and confront the key witness against him, D.T.. He emphasised in particular that, in view of the fact that he had been tried and punished for an offence carrying the heaviest penalty in Turkey (life imprisonment), he should at the very least have been able to question the only witness who had made incriminatory statements against him.

Just satisfaction: The Court held that the finding of a violation constituted in itself sufficient just satisfaction for the non-pecuniary damage sustained by Mr Daştan(echrcaselaw.com editing).