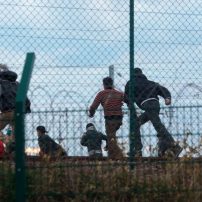 Failure to provide care for an unaccompanied foreign minor, aged 12, in the “lande de Calais” shanty town was in breach of the Convention

The case concerned the failure by the French authorities to provide an unaccompanied foreign
minor with care before and after the dismantling of the makeshift camps set up in the southern
section of the “lande de Calais” (“Calais heath”). Large numbers of people hoping to seek asylum in
the United Kingdom had for many years been living there in tents or huts, in overcrowded conditions
without even the most basic sanitation.

The Court was not convinced that the authorities had done all that could reasonably be expected of
them to fulfil the obligation of protection and care incumbent on the respondent State vis-à-vis an
unaccompanied foreign minor unlawfully present on French territory, that is to say an individual
belonging to the category of the most vulnerable persons in society. For several months the
applicant had thus lived in the “lande de Calais” shanty town, in an environment completely
unsuited to his status as a child and in a situation of insecurity rendered unacceptable by his
young age.

The Court held that the extremely negative circumstances prevailing in the makeshift camps and the
failure to enforce the court order intended to secure protection for the applicant amounted to a
violation of the respondent State’s obligations, and that the Article 3 severity threshold had been
reached. It deduced that on account of the failure of the French authorities to take the requisite
action, the applicant had found himself in a situation tantamount to degrading treatment.

The applicant, Jamil Khan, is an Afghan national who was born in 2004 and lives in Birmingham
(United Kingdom).

By order of 2 November 2015 the Lille urgent applications judge, at the prompting, in particular, of a
number of non-governmental organisations (NGOs), instructed the Pas-de-Calais Prefect to ascertain
the number of unaccompanied minors in distress and to co-operate with the Pas-de-Calais
Département in placing them in care. The judge also ordered her to install sanitary facilities on the
“lande de Calais” site.

The Government submitted that all the amenities and sanitary and security facilities ordered by the
urgent applications judge had been installed. The applicant stated that the Ombudsman’s General
Recommendation of 20 April 2016 had mentioned that although the numbers of unaccompanied
minors had indeed been ascertained as of January 2016, the counting exercise had not led to the
actual provision of care for those minors. The Département Council had merely organised patrols by under-trained individuals, without the assistance of translators to prepare for the details of care provision.

On 12 February 2016 the Pas-de-Calais Prefect announced her decision to order the evacuation of
the southern section of the “lande de Calais” site. The evacuation took place between 29 February
and 16 March 2016. The northern section was evacuated at the end of October 2016.

The applicant submits that he left Afghanistan at the end of August 2015 for the United Kingdom,
and that he reached Calais by following refugees in the hope of finding some way of crossing to
England. He therefore settled into a hut in the southern section of the “lande de Calais” and
contacted a number of NGOs, including “Cabane juridique” (“the Legal Hut”). On 19 February 2016
that NGO lodged with the Children’s Judge an application for a provisional care order for the
applicant. The Children’s Judge appointed a statutory representative and ordered the applicant’s
provisional placement at the Calais Department for Children’s and Family Affairs as of 23 February
2016.

The applicant pointed out that neither the Département nor the Prefecture had taken any action to
provide for him. The Government observed that the social welfare services had been unable to
enforce the placement order because the applicant had failed to attend the welfare offices and his
lawyer, his statutory representative and the NGO involved had not informed them of his
whereabouts.

During the week of 20 March 2016 the applicant had left the “lande” site and entered Britain
illegally, where he had been taken into care by the UK child welfare agencies.

The Court noted the applicant’s young age, having arrived in France as an 11-year-old. He had been
12 when the southern section of the “lande de Calais” had been dismantled and he had left the
country. The Court observed that he had lived in the “lande de Calais” for some six months.
The Court noted that the Government did not dispute the fact that the applicant had not been
provided with care by the authorities.

The Court noted that in its order of 23 November 2015 the Conseil d’Etat urgent applications judge
had used the word “shanty town” to describe the “lande de Calais” site, had found that the provision
for the applicants’ basic needs in terms of hygiene and supplies of drinking water had been
“manifestly inadequate”, and had pointed to “negligence such as to expose them to patently
inhuman and degrading treatment, thus seriously, and manifestly unlawfully, infringing a
fundamental freedom”. Following the evacuation of the southern section of the site, many of the
occupants had moved to the northern section, which had exacerbated the overcrowding there.
Owing to the failure of the authorities to protect the applicant, and despite support from various
NGOs, he had therefore spent six months living in an environment manifestly unsuitable for children,
characterised by insalubrity, precariousness and insecurity. On 22 February 2016, on the grounds of
the applicant’s perilous situation, the Children’s Judge of the Boulogne-sur-Mer Regional Court had
ordered his placement with the child welfare department. The Court considered that the failure to
provide care, which had already been extremely problematic before the southern section of the site
had been dismantled, had become even worse after that operation because of the demolition of the
hut in which he had been living and the general deterioration of living conditions on the site.

The very fact that the applicant had had to wait for the Children’s Judge to order his placement
before his case could actually be considered by the competent authorities raised questions as to the
respondent State’s compliance with the obligation under Article 3 of the Convention to protect and
provide care for unaccompanied foreign minors. It followed that the competent authorities had not
even identified the applicant as such, even though he had been present on the “lande de Calais” for
several months and, as a young child, should have been very conspicuous. It would therefore appear
that the means employed to identify unaccompanied foreign minors present on the site had been
inadequate.

The Court observed that the unaccompanied foreign minors present on the site had not always
accepted the provision offered to them. Nevertheless, it noted that the Ombudsman, in particular,
took the view that the reason for the minors’ reluctance to accept the measures was that the system
of providing shelter for them was unsuited to their situation and that the reluctance in question
could not in any case justify inaction on the part of the authorities, which, being responsible for
protecting the children, ought to have carefully considered the means of doing so, with due regard
to the specific nature of such cases.

The Court noted that the applicant, for his part, stated that he would have accepted official
protection. The Court repeated that he had been a 12-year-old child who, moreover, probably had
limited knowledge of the French language. It was therefore not convinced by the Government’s
argument that it had been incumbent on the applicant in person to take the requisite steps to secure
official protection. Nor did it consider that the NGOs, the lawyer who had represented the applicant
in the proceedings leading up to the order of 22 February 2016 or his statutory representative could
be blamed for not having taken him to the reception centre designated by the authorities, since that
task had manifestly been a matter for the authorities themselves.

The Court was aware of the complexity of the task facing the domestic authorities in view of the
difficulty of identifying minors among all the persons present on the site and of providing them with
appropriate care, given that they did not always want the latter. The Court also noted the ambiguity
of the applicant’s attitude, in that, although he had applied to the Children’s Judge for provisional placement, he had not intended to remain in France but rather had been planning to reach the
United Kingdom. The Court further observed that the domestic authorities had not remained
completely inactive since they had taken steps to enforce the Children’s Judge’s order of 22 February
2016. Nevertheless, the Court was not convinced that the authorities had done all that could
reasonably be expected of them to fulfil the obligation of protection and care incumbent on the
respondent State vis-à-vis an unaccompanied foreign minor who was unlawfully present in French
territory, that is to say an individual belonging to the category of the most vulnerable persons in
society.

For several months the applicant had thus lived in the “lande de Calais” shanty town, in an
environment completely unsuited to his status as a child and in a situation of insecurity rendered
unacceptable by his young age.

The Court found that the particularly serious circumstances of the case and the failure to enforce the
Children’s Judge’s order geared to protecting the applicant, taken in conjunction, amounted to a
breach of the respondent State’s obligations. On account of the failure of the French authorities to
take the requisite action, the applicant had found himself in a situation which had amounted to
degrading treatment. There had therefore been a violation of Article 3 of the Convention.

The Court held that France was to pay the applicant 15,000 euros (EUR) in respect of non-pecuniary
damage(echrcaselaw.com editing).