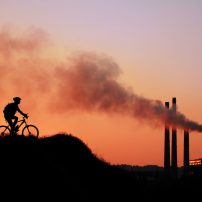 The case concerned the applicants’ complaint that a thermal power station, which was in the immediate vicinity of their homes, and had a negative impact on their health and well-being. Their claims for compensation before all Georgian courts were rejected.

The ECtHR has ruled that there has been a violation of the Convention.

The application was made by Ivane Jugheli (now deceased), Otar Gureshidze, and Liana Alavidze, Georgian nationals who were born in 1946, 1947, and 1957 respectively. The case concerned their complaint that a thermal power plant located in close proximity to their homes had endangered their health and well-being.

The “Tboelectrocentrali” power plant was located approximately four metres from the block of flats where the applicants lived in Tbilisi. The power plant first started operations in 1939 and partially ceased in February 2001. According to the applicants, while operational the plant’s potentially dangerous activities were not subject to the relevant regulations, as a result of which it produced air pollution which negatively affected their health and well-being. Their claims for compensation in the Georgian courts were all rejected, ultimately by the Supreme Court in a final judgment of 21 April 2005.

Relying on Article 8 (right to respect for private and family life and the home), they complained about the State’s failure to protect them from the power plant’s pollution.

The Court also decided to strike the application out of its list of cases, in so far as Mr Jugheli’s complaints were concerned.