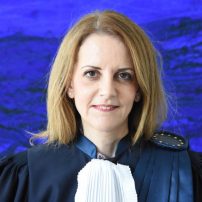 The European Court of Human Rights’ Judges, sitting in plenary session, have  elected on the 7th of September 2020 Marialena Tsirli Registrar of the Court for a five-year term of office starting on 1 December 2020.

Marialena Tsirli will succeed Roderick Liddell, who has been Registrar of the Court since 1 December 2015.

Ms. Tsirli was born in Thessaloniki in 1967, but grew up in Athens.

In March 1994, following a competition from the Council of Europe, based in Strasbourg, she started working as a lawyer at the Secretariat of the European Commission of Human Rights.

Following the abolition of the Commission in 1998 with the entry into force of the 11th Protocol to the ECHR, she continued to work in the new European Court of Human Rights.

In 2004, she was promoted to Head of the Greek Department. She handled as Rapporteur many important cases that had international and national impact but also contributed to the formation of the case law of the Court, cases of religious freedom, protection of property, conditions of detention, etc.

In 2010 she was promoted to Deputy Section Registrar, in 2016 to Deputy Registrar and in June 2019 she was elected by the Plenary Session of the Court Deputy Registar of the Strasbourg Court.

On 7 September 2020 she was elected by the Plenary Session of the Court ECHR Registar for a five-year term beginning on 1 December 2020. She will head approximately 640 staff members of the European Court and will be responsible for the organization and operation of the Registry, while assisting the President of the Court and the other judges in the performance of their high duties.

Ms Tsirli is the first woman and the first Greek woman to take up this high position in the Court.

Her speeches and articles reflect a deep knowledge of the Convention, the operation of the Court and reflect a clear and original thinking.

Ms. Tsirli is married to Mr. Dimitris Tenezakis, an architect who works for the European Parliament in Strasbourg and Luxembourg.

Echrcaselaw wishes Ms. Tsirli good luck in her difficult mission which is extremely helpful in the work of judges and in the defense and development of fundamental rights and freedoms!