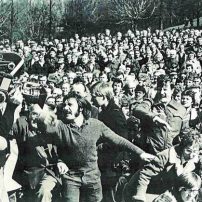 Freedom of assembly is the cornerstone of a democratic society

Peaceful demonstrations and sit-in protest. Condemnation for payment of administrative fines. Impact on the applicants’ financial situation and their role as human rights defenders, which may have a serious negative impact on the exercise of their rights. The national courts have not tried to balance the competitive interests, namely, the exercise of the right to peaceful assembly and, on the other, the maintenance of public order and the protection of the rights and freedoms of others. Infringement of the right of assembly.

The three applicants, Mr Adnan Öğrü, Mr Veysel Kurtuluş Alabaş and Ms Beyhan Günyeli, are Turkish nationals who were born in 1954, 1986 and 1972 respectively.

Under a Gubernatorial Decree of November 2009 restricting the places and times when demonstrations were authorised and prohibiting the carrying of placards and the chanting of slogans, the three applicants were ordered to pay administrative fines of 143 Turkish lira (about 70 euros), on several occasions in the cases of Mr Öğrü and Mr Alabaş.
All three applicants appealed against the fines. Their appeals were dismissed by a series of decisions by the Adana District Court, which ruled that the fines had been in conformity with the law and that the veracity of the charges against the applicants had not been contested. Only Mr Öğrü had one of his fines, which was imposed during a demonstration which was not one of those giving rise to the present application, cancelled by the district court by a decision of 19 April 2010. In its decision, the court, with reference to Articles 10 and 11 of the Convention and the case-law of the Court, concluded that the imposition of the fine had amounted to an indirect deprivation of the applicant’s freedom of assembly.

The Court considered that the applicants’ complaint of a violation of their right to freedom of expression and peaceful assembly should be examined solely under Article 11 and not under Articles 10 and 11.

The Government submitted an objection as to admissibility, stating that since the fines had been quite lenient the applicants could not complain that they had suffered major damage. The Court considered that although the fines appeared lenient a priori, they had nevertheless had a major impact on the applicants’ economic situations, in particular owing to the number of fines involved and the first applicant’s low income. Since the applicants were human rights activists, the alleged violation was liable to have serious effects on their exercise of the right to demonstrate.
Furthermore, the Court reiterated the crucial importance of freedom of peaceful assembly as a cornerstone of democratic society. It therefore rejected the Government’s objection.

The Court noted that the review conducted by the district courts in the framework of the applicants’ appeals against their fines had been very limited in scope. The judges had merely verified the accuracy of the facts by referring to police records of incidents. The judges did not appear to have attempted to balance the various competing interests, that is to say, on the one hand, the exercise of the right to demonstrate peacefully, and on the other, the preservation of public order and the protection of the rights and freedoms of others. In particular, the courts had ignored the applicants’ pleas concerning the peaceful nature of the demonstrations and the circumstances under which they had taken place. The Court emphasised that the domestic courts should have adjudicated on the proportionality of the impugned interference with the applicants’ rights. It reiterated that by reason of their direct and continuous contact with the realities of their countries, the domestic courts were best placed to strike a fair balance between the various competing interests.

The Court noted that the Adena District Court had granted Mr Öğrü’s appeal against a fine imposed on him following another demonstration unconnected to those giving rise to the fines challenged in the instant case. The court had based its decision on Articles 10 and 11 of the Convention and the Court’s case-law. In the present case, however, the domestic courts had not weighed up the competing interests. The Court therefore considered that they had failed to provide relevant and sufficient grounds to establish that the interference had been “necessary in a democratic society”.

Since the impugned fines had not been the subject of an adequate judicial review, the Court concluded that there had been a violation of Article 11.

The Court considered that by failing to avail himself of his right to request a public hearing before the district court, Mr Alabaş had waived that right. It therefore rejected his complaint under Article 6 as manifestly ill-founded.

It also pointed out that Article 13 neither granted a right to an appeal procedure nor required States to establish courts of appeal or cassation. Therefore, Mr Alabaş’s complaint that there had been no effective remedy against the district court’s decision had to be rejected as incompatible with the provisions of the Convention.

The Court held that Turkey was to pay Mr Ögrü 240 euros (EUR) and Ms Günyeli EUR 80 in respect of pecuniary damage(echrcaselaw.com editing).