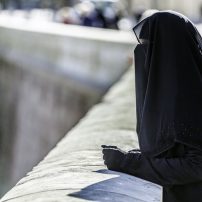 The case concerns the Belgian law of 1 June 2011, which prohibits the use of clothing in public spaces that partially or wholly covers the person.

Ms. Belcacemi and Ms Oussar are Muslims who, on their own initiative, wear the niqab – a veil that covers the whole face except the eyes – due to their religious beliefs.

Both appealed before the Constitutional Court to suspend and annul the law, but the decision was negative.

The ECtHR found that the disputed restriction could be regarded as ‘necessary in a democratic society’, explaining that this conclusion applies to both Article 8 of the Convention and Article 9. Consequently, there has been no violation of either Article 8 nor Article 9 of the Convention.

The applicants, Samia Belcacemi (a Belgian national) and Yamina Oussar (a Moroccan national), were born in 1981 and 1973 respectively and live in Schaerbeek and Liège (Belgium).
The case concerns the Belgian law of 1 June 2011 banning the wearing in public places of clothing which partially or totally covers the face.

Ms Belcacemi and Ms Oussar present themselves as Muslims who have decided on their own initiative to wear the niqab – a veil covering the face except for the eyes – on account of their religious convictions.

Following the enactment on 1 June 2011 of the law in question, Ms Belcacemi initially decided to continue wearing the veil in the street. However, under pressure, she subsequently decided to remove her veil temporarily, being afraid that she might be stopped in the street and then heavily fined or even sent to prison. Ms Oussar, for her part, states that she has decided to stay at home, with the resulting restriction on her private and social life.

On 26 July 2011 Ms Belcacemi and Ms Oussar brought actions for the suspension and annulment of the law before the Constitutional Court. Their cases were dismissed by that court in October 2011 (application for suspension) and in December 2012 (application for annulment).

Article 8 (right to respect for private and family life) and Article 9 (freedom of thought, conscience and religion)

The Court took the view that this part of the application had to be examined in the light of the liberty secured by Article 9 of the Convention, as in the S.A.S. v. France case.

Firstly, the Court observed that the Law of 1 June 2011 – whose wording was very similar to that of the French Law of 11 October 20102– could be regarded as worded with sufficient precision to satisfy the requirement of foreseeability required by Articles 8 and 9 of the Convention.

Secondly, the Court found that the drafting history of the Belgian Law used three aims to justify the ban in Belgium: public safety, gender equality, and a certain conception of “living together” in society. It noted that, as it had found in S.A.S. v. France2, the concern to ensure respect for the minimum guarantees of life in society could be regarded as an element of the “protection of the rights and freedoms of others” and that the ban was justifiable in principle solely to the extent that it sought to guarantee the conditions of “living together”.

Thirdly, the Court explained that, through their direct and constant contact with the stakeholders in their country, the State authorities were in principle better placed than an international court to assess the local needs and context. Where questions of general policy were at stake, concerning which there might be profound disagreements in a democratic society, particular importance had to be given to the national decision-maker. In addition, under Article 9 of the Convention the State had a broad margin of appreciation to decide whether and to what extent a restriction on the right to manifest one religion or convictions was “necessary”. In adopting the provisions in question, the Belgian State had sought to respond to a practice that it considered to be incompatible, in Belgian society, with social communication and more generally the establishment of human relations, which were indispensable for life in society. It was a matter of protecting a condition of interaction between individuals which for the State was essential to ensure the functioning of a democratic society. The question whether the full-face veil was accepted in the Belgian public sphere was thus a choice of society. As it had emphasised in S.A.S. v. France, the Court explained that in such cases it had to show reserve in its scrutiny of Convention compliance, in this case in assessing a decision taken democratically within Belgian society. It noted that the decision-making process leading to the ban in question had taken several years and had been marked by comprehensive debate in the lower house of Parliament and by a detailed examination of the various interests by the Constitutional Council. In addition, there was currently no consensus in such matters among the member States of the Council of Europe, whether for or against a blanket ban of the full-face veil, thus justifying a broad margin of appreciation for the Belgian State.

Fourthly, as regards the proportionality of the restriction, the Court noted that that the sanction for non-compliance with the ban under Belgian law could range from a fine to a prison sentence. The main sanction was the fine, being the lightest penalty. Imprisonment was reserved for repeat offenders and was not applied automatically. In addition, the offence was classified as “hybrid” in Belgian law, partly under the criminal law and partly administrative. Thus, in the context of administrative action, and contrary to what the applicants had contended, alternative measures were possible and taken in practice at municipal level. Moreover, the present application did not concern a specific sanction imposed on the applicants themselves. Consequently, having regard to the broad margin of appreciation afforded to the Belgian authorities, the Court found that the ban under the Law of 1 June 2011, even though it was controversial and undeniably carried risks in terms of the promotion of tolerance in society (see S.A.S. v. France), could be regarded as proportionate to the aim pursued, namely the preservation of the conditions of “living together” as an element of the “protection of the rights and freedoms of others”.

Article 14 (prohibition of discrimination), taken together with Articles 8 and 9

The Court reiterated that a general policy or measure which had disproportionate prejudicial effects on a group of individuals could be regarded as discriminatory – even if it did not specifically target the group and there was no discriminatory intent – if that policy or measure lacked “objective and reasonable” justification, if it did not pursue a “legitimate aim” or if there was no “reasonable relationship of proportionality” between the means used and the aim pursued. In the present case, the measure had an objective and reasonable justification for the same reasons as those developed above. Consequently, there had been no violation of Article 14 of the Convention taken together with Articles 8 and 9 of the Convention.

The Court took the view that no separate question arose under Article 10 (freedom of expression), taken separately and in conjunction with Article 14 of the Convention, and it dismissed the other complaints raised by Ms Belcacemi and Ms Oussar, pursuant to Article 35 §§ 3 and 4 (conditions of admissibility) of the Convention.

Judge Spano expressed a concurring opinion, joined by judge Karakaş, which is appended to the judgment