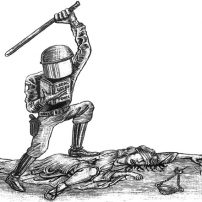 Police violence against a woman in the dock of Strasbourg

The applicant, Lyubov Shevtsova, is a Russian national who was born in 1961 and lives in Nizhniy Novgorod (Russia). The case concerned alleged ill-treatment sustained by Ms Shevtsova during a dispute with two police officers.

According to the Government, Ms Shevtsova behaved in an aggressive manner towards the police officers and insulted them; she allegedly tore up the summons and threw it in the face of one of the police officers, who asked her to accompany them to the police station in order to file a report for abusive behaviour towards a person exercising public authority.
After the incident, Ms Shevtsova went to the traumatology unit for the Avtozavodskiy district of Nizhniy Novgorod, where she was given a medical certificate recording bruising to the soft tissues of the right eyebrow. On 9 November 2001 the forensic doctor at the Nizhny Novgorod regional forensic medical office also noted the bruising in question, as well as other scratches and hematoma on various parts of the applicant’s body.

Ms Shevtsova submitted a written complaint to the prosecutor on 8 November 2001, complaining of the ill-treatment inflicted on her by the two police officers. Between 2001 and 2009 the investigating authorities issued several decisions refusing to open a criminal investigation. Ms Shevtsova’s appeals to the Avtozavodskiy district court of Nizhniy Novgorod and the Nizhniy Novgorod Regional Court were dismissed in February and April 2010 respectively. Ms Shevtsova was not prosecuted for abusive behaviour towards a person exercising public authority.