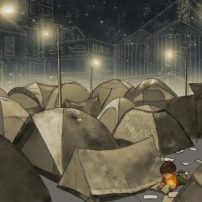 No evidence of degrading treatment by an asylum seeker. The applicant has not shown that her basic needs in food, hygiene and living could be met

The case concerned asylum-seekers housed in a tent camp in Metz, who complained about the poor
conditions in which they were accommodated.

Noting, firstly, that certain applicants (nos. 2 to 23) had not maintained contact with their lawyer
and had failed to keep him informed of their place of residence or to provide him with any other
means of contacting them, the Court considered that they had lost interest in the proceedings and
no longer intended to pursue their application.

With regard to the applicant E.G., she had been accommodated, according to her submissions, in the
tent camp on Avenue de Blida from 20 March 2014 to 18 July 2014. However, she had not provided
the Court with any specific information concerning her actual living conditions during that period.
She had also failed to show that she had been unable to meet her basic needs. Lastly, she had been
allocated housing from 18 July 2014, and had not lacked any prospect of her situation improving.
Her allegation of ill-treatment was therefore dismissed.

The 23 applicants are Albanian, Armenian, Azerbaijani, Bosnian, Kosovar, Serbian and Togolese
nationals. As families made up of couples accompanied by children aged four to fourteen at the
relevant time, or without children, and seven adults, they all presented themselves as
asylum-seekers.

On 19 June 2013 the Prefect of Moselle opened a camp on Avenue de Blida in Metz. Up to
450 people lived in tents on this site. The camp was closed and dismantled on 15 November 2013,
then reopened on 17 March 2014 to cater for the occupants of a makeshift camp being
re-established nearby.

E.G., the first applicant, who was born in 1958, is a Kosovar national. She arrived in France in January
2012 and applied for asylum. Her temporary leave to remain as an asylum-seeker was refused by the
Prefect in February 2012 and her application for international protection was dismissed by the
French Office for the protection of refugees and stateless persons (OFPRA) in March 2012. In her
application, she stated that she had entered France in February 2014 to seek asylum. On 20 March
2014 she moved into the camp on Avenue de Blida in Metz. On 26 March 2014 she lodged an
application with the Strasbourg Administrative Court for urgent relief, relying in particular on
Directive 2003/9/EC of 27 January 2003 laying down minimum standards for the reception of
asylum-seekers. She complained specifically about the extreme precariousness of her housing
conditions and the fact that she had never been granted decent accommodation. The other
applicants filed a similar urgent application with the Strasbourg Administrative Court. On 27 and
28 March 2014 and 23 June 2014, the urgent-applications judge dismissed these applications on the
grounds, inter alia, that on account of their very recent arrival in France the Prefect of Moselle could
not be accused of failing to provide for their accommodation immediately.

On 4 December 2014 and 25 April 2016 the same applicant applied for a residence permit on the
basis of status as an ill foreigner. On 4 November 2016 the Prefect issued an order refusing her a
residence permit and requiring her to leave France within 30 days, indicating Kosovo or Montenegro
as the destination country.

The Court noted that the lawyer had informed it that he had been unable to contact the applicants
listed as nos. 2 to 23 in the present application, in spite of several attempts and searches. Those
applicants had not maintained contact with their lawyer and had failed to keep him informed of
their place of residence or to provide him with any other means of contacting them.

The Court considered that it could conclude on that basis that those applicants had lost interest in
the proceedings and no longer intended to pursue their application.

The applicant E.G. did not dispute the fact that her asylum claim had been rejected by the OFPRA in
March 2012 and that, in consequence, she had been ordered to leave France. Equally, she did not
dispute that she had presented herself at the prefecture on 2 April 2014 to lodge an asylum claim
and that, summoned to provide evidence that she had returned to her country of origin, she had not
attended the relevant appointment or responded to the French authorities’ request for justification.
The Court noted that the applicant, who had been invited to submit a copy of her asylum claim, of
the OFPRA’s decision and, as appropriate, of the decision by the National Asylum Tribunal, had
added none of those documents to the file. For their part, the Government had submitted the
decision of 16 March 2012 by which the OFPRA had definitively rejected her asylum claim.

The Court observed that, although the applicant claimed to have been accommodated in the tent
camp on Avenue de Blida from 20 March 2014 to 18 July 2014, she had not submitted specific details
about her actual living conditions during that period. Furthermore, the Court questioned the reality
of the applicant’s status as an asylum seeker during the period from 20 March to 18 July 2014.

The Court noted in consequence that the applicant had not established that she had been unable to
cater for her basic needs: food, hygiene and a place to live. The Court also noted that the applicant,
who had been allocated housing from 18 July 2014, had not lacked any prospect of her situation
improving.

The Court concluded that the applicant’s complaint that she had been submitted to treatment
exceeding the level of severity required for the application of Article 3 was not sufficiently
substantiated and had therefore to be rejected.