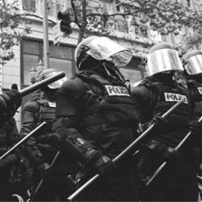 Information on the presence of firearms in the applicant’s apartment. Use of violence against the applicant in her home because she refused to open the door despite the search warrant.

The police officers grabbed the applicant’s hands, twisted them and turned them on her back, handcuffed her and immobilized her on the ground with the police officer’s leg. Her T-shirt, which had the imprint of the policeman’s boot on the back, was kept as evidence.

The ECtHR held that the applicant ‘s treatment and the insufficient planning of the operation, which allowed too much room for improvisation and therefore possible use of excessive force, amounted to degrading treatment in breach of the essential aspect of Article 3 of the Convention.

The ECtHR also found that there had been a failure in its police assessment of whether excessive use of force was required, and that the police had not been prepared with an alternative plan in case the applicant refused to open her house and in the case of forced entry into it. . The ECtHR also found a violation of the procedural aspect of Article 3 of the ECHR.

The applicant, Ana Mîţu, is a Moldovan national who was born in 1983 and lives in Chişinău
(Republic of Moldova).

The case concerned an allegation of police brutality during a raid.

In May 2013 the police, including a special forces unit, raided the flat occupied by the applicant and
her husband as part of an investigation into the husband’s alleged theft of electric switches,
detergents and alcoholic beverages.

On the same day as the raid the applicant lodged a complaint of excessive use of force by the police.
A medical report the following day recorded violet-blue bruises on her back, left forearm, and knee.
It concluded that the injuries had probably been caused in circumstances as described by the
applicant, which included her arms being twisted behind her back, being handcuffed and being
forced to the ground. Her T-shirt with a boot print on the back of it was retained as evidence.

In June 2013 the applicant was acknowledged as a victim but later the same month the Botanica
prosecutor’ s office refused to initiate a criminal investigation. It found that the actions of the
officers of the Special Forces unit involved in the raid had been taken while stopping the applicant
and her husband from deliberately opposing the lawful orders of the police in the form of a search
and preventing them from destroying stolen items.

An appeal by the applicant, relying on Article 3 (prohibition of inhuman or degrading treatment) of
the Convention, was rejected by a higher ranking prosecutor in August 2013. The investigating judge
of the Botanica District Court dismissed the applicant’s further appeal in October 2013.

The applicant complained under Article 3 that the police had used unjustified, excessive force
against her and that there had been no effective investigation of her allegation.

The Court noted that the applicant refused to open the door to the police, even after being shown a search warrant. At that time, therefore, she did not cooperate with the authorities. It is true that, at the last moment, her husband opened the door, thus giving a first sign of obedience to the orders of the police. However, in the absence of a clear indication that he and the applicant had surrendered, it cannot be said that the police were able to verify, before invading, that the persons inside the apartment would not resist.

In the present case, however, the officer knew the day before the investigation was scheduled that the suspects could possess weapons. Despite the availability of this information, it appears that several police officers went to their apartment without any backup plan in case the suspects refused to open the door. In addition, when it was finally decided to call the special forces, the latter were not fully aware of the operation until the commander of the unit was called at about 1.45 p.m. The Special Forces then went to the site, received brief information about the situation in the apartment, and had to make their own assessment of the situation on the spot. This meant that the Special Forces had to improvise on many of their actions, making the possibility of using excessive force more likely than if the whole operation had been thoroughly planned.

The ECtHR considered that the applicant had not been injured during an accidental operation in which the police could be called upon to react without prior preparation. Instead, authorities had enough time to plan the possibility of her refusing to open the door and organize the investigation, knowing about the weapons that might be in the house. However, the events show a complete lack of planning, as the police and the Special Forces did not anticipate the developments, but simply reacted to them.

The ECtHR therefore concluded that the applicant ‘s treatment and the insufficient planning of the operation, which allowed too much room for improvisation and therefore possible use of excessive force, amounted to degrading treatment in breach of Article 3 of the Convention.

The Court notes that on 20 June 2013 a prosecutor refused to open a criminal investigation into the applicant’s allegations. Before doing so, the prosecutor examined the statements made by the applicant and her husband, police officers and officers of the unit, as well as the medical report of 31 May 2013 and a video made by a television crew. He concluded that the actions of the officers of the unit had been lawful; they had been aimed at carrying out a search of the applicant’s flat, while preventing the destruction of allegedly stolen items. The superior prosecutor, in his decision of 16 August 2013, and the investigating judge in the decision of 8 October 2013, essentially repeated the same reasoning.

The Court notes that none of the authorities which examined the applicant’s complaint paid any attention to her claim, backed by a T-shirt with a boot print on the back, that a unit member had pushed her down to the floor with his foot, when she was already under the control of at least two special force officers specially trained for immobilising suspects and when, as acknowledged by a number of people, she was barely able to coordinate her movements.

Moreover, the prosecution and the courts made no analysis of the manner in which the operation had been planned so as to determine whether all reasonable steps had been taken to minimise or prevent injuries to those inside the flat. There is no mention in the decisions taken of having verified the existence and source of the “operational information” according to which the suspect was in possession of firearms. It was that information that had made the use of the special forces necessary, with the relevant consequences on the use of force. Neither the prosecution nor the judge considered whether the unit had had the right to use special means against a woman, in accordance with the conditions set out in section 8 of Law no. 218. Notably, they did not consider whether she had attacked the officers or had resisted in a way which was dangerous to other people’s life and health. Hence, even the lawfulness of the use of force was not fully verified by the domestic authorities. Furthermore, the authorities did not identify which specific officers ill-treated the applicant, notably by pressing her to the floor with the boot.

Most importantly, although the prosecutors and the investigating judge verified that force had been used in circumstances provided for by law (namely, resistance to lawful orders of the police, and the need to neutralise any potential danger from firearms), there was no specific analysis of the degree of force used. In other words, having established that force had been lawfully used against the applicant and her husband, the authorities did not verify whether such force had been excessive in the circumstances.

In view of these deficiencies of the investigation, the Court concludes that there has been a breach of the procedural limb of Article 3 in the present case.