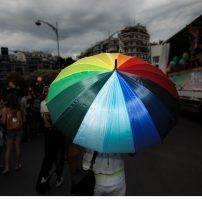 Family life. Rights of homosexual couples in legal recognition. Registering married couples in a registry. The concept of family life in Article 8 of the ECHR includes the de facto stable same-sex relationship. The protection level of the same concept also includes the right to register the marriage of homosexuals who has been legally held in a foreign country despite the lack of relevant legislation of the country in which the marriage is registered. The ECtHR develops a protective grid by recognizing that same-sex couples need legal recognition and protection of their relationships.

The State can not ignore the situation of same-sex couples in the context of the protection of family life without providing such means as to ensure their relationship, including the registration of their legal marriages abroad. Non-registration constitutes a violation of their family life. Infringement of Article 8.

All the couples were married outside Italy, the first three in Canada, the fourth in California in the United States, and the last two in the Netherlands. On their return to Italy, before applying to the Court in 2012, they all attempted to have their marriages registered in Italy, but were refused.

In particular, Ms Orlandi and Ms Mortagna and Mr D.P. and Mr G.P. tried to register their marriages in the Italian municipalities where they lived, in 2011 and 2012 respectively. Both couples were told that the Italian legal order did not allow marriage between couples of the same sex. The authorities also made reference to a 2001 circular from the Ministry of Internal Affairs, which stated that a marriage contracted abroad by persons of the same sex, one of whom was Italian, could not be registered as it was contrary to the norms of public order.
Mr Isita and Mr Bray and Mr Goretti and Mr Giartosio were initially refused registration of their marriage in 2011 by the municipalities where they lived, Naples and Rome, but were then granted it in 2014 after new guidance was issued by the mayors of those cities. However, the registration was later cancelled after a further Ministry of Internal Affairs circular ordered the reversal of such registration decisions. The fifth couple were equally unsuccessful in having their marriage registered.

After marrying in The Hague in 2002, the sixth couple, Mr Garullo and Mr Ottocento asked to register their marriage in Latina, but were refused on the grounds that the Italian legal order did not provide for the possibility of two persons of the same sex to marry. They began court proceedings to have the marriage registered, but lost their case, the final decision being handed down by the Court of Cassation in 2012.

Some of the couples have since benefited from 2016 legislation, passed after the European Court of Human Right’s judgment in Oliari and Others v. Italy, and further decrees, which provided for same-sex civil unions and allowed for marriages contracted abroad to be registered as such unions.

The Court observed that the couples’ complaints concerned the fact that they had not been able to register the marriages they had contracted abroad, either as marriages or in any other form, in Italy thus depriving them of legal protection and other associated rights.

It reiterated that under its case-law, States were still free to restrict marriage to different-sex couples, however, same-sex couples needed legal recognition and protection of their relationship.
Indeed, it had found a violation of Article 8 in the case of Oliari and Others because Italy had failed to provide such a legal framework for same-sex unions.
It observed that in various jurisdictions civil unions provided an opportunity to obtain a legal status that was equal or similar to marriage and, in principle such a system could satisfy the provisions of the European Convention.

The situation in Italy had changed in 2016 when new legislation on same-sex civil unions had been passed and further decrees issued, with some of the couples in this case having their relationships recognised under those provisions. However, their complaint had been made in 2012, before the amendments had come into effect. The core issue was whether a fair balance had been struck between the competing interests of the State and the couples before the new laws.

The Court accepted that Italy’s choice not to allow same-sex marriages could not be condemned under the Convention, but the crux of the case was that the couples had not been able to obtain any kind of legal recognition for their unions. The Court noted rapid developments in this field, with 27 of the 47 Council of Europe members now having legislation to recognise same-sex unions as a marriage, civil union or registered partnership. At the same time, there was far less consensus about the registration of same-sex marriages contracted abroad, meaning States had considerable room for manoeuvre (“a wide margin of appreciation”) as to whether to register marriages contracted abroad as a marriage under domestic laws.

However, the lack of any recognition of their relationships had left the couples in a legal vacuum, which had failed to take account of their social reality and left them facing obstacles in their daily life. No prevailing community interests had been put forward to justify a situation in which the applicants’ relationships had been devoid of any recognition and protection. According to the Court, Italy could not disregard their situation, which had corresponded to family life within the meaning of Article 8, without offering a means to safeguard their relationship. Until recently that had not been the case. The Court concluded that the State had failed to strike a fair balance between the competing interests and that there had been a violation of the couples’ rights. It decided that there was no need to examine the complaints under Article 14 in conjunction with Article 8 or Article 12.

The Court held that Italy was to pay each applicant 5,000 euros (EUR) in respect of non-pecuniary damage. It awarded EUR 9,000 in respect of costs and expenses to Mr Garullo and Mr Ottocento and EUR 10,000 jointly to the other couples.