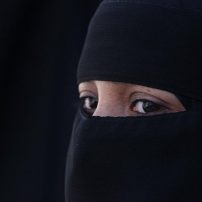 The applicant was born and lives in Belgium. In June 2008, the municipalities of Pepinster, Dison and Verviers adopted a municipal by law banning garments or clothes that hid the face all the time in all public places.

In August 2008, the applicant, who was a Muslim, and on her own initiative decided to wear niqab – a veil covering the whole face except the eyes – and appealed to the State Council for the ban to be lifted. She claimed, inter alia, that the legal provision referred only to the Islamic veil she wore and that the ban constituted an interference with the rights guaranteed by Articles 8, 9, 10 and 14 of the European Convention on Human Rights. The Court dismissed her appeal as inadmissible.

The applicant appealed to the European Court of Human Rights, which held that the prohibition could be considered to be proportionate to the objective pursued, namely to maintain living conditions as part of the ‘protection of third party rights and freedoms’, and ruled that the restriction at issue could be considered as “necessary in a democratic society”. No violation of Articles 8 and 9 of the Convention.

The applicant, Fouzia Dakir, is a Belgian national who was born in 1977 and lives in Dison (Belgium).

In June 2008 the municipalities of Pepinster, Dison and Verviers adopted a municipal by-law providing in Article 113bis thereof for a ban on the wearing of clothing concealing the face, at all times and in all public places.

In August 2008 Ms Dakir, presenting herself as a Muslim who had decided on her own initiative to wear the niqab – a veil covering the face except for the eyes – applied to the Conseil d’État for the annulment of the ban. She claimed, among other things, that the provision expressly concerned the Islamic veil that she wore and that the resulting ban constituted an interference with the rights secured by Articles 8, 9, 10 and 14 of the European Convention on Human Rights. She also contended that the interference had no legitimate aim as secularism was not a constitutional principle and the wearing of the veil could not be subject to a blanket ban. In June 2011 the Conseil d’État dismissed the case for failure to comply with an admissibility condition that it raised of its own motion.

Articles 8 (right to respect for private and family life) and 9 (right to freedom of thought, conscience and religion)

The Court noted, firstly, that the contested ban had a legal basis – the joint by-law of the municipalities included in the Vesdre police area – and thus met the criteria set out in its case-law concerning Articles 8 and 9 of the Convention.

Secondly, as in the case of S.A.S. v. France2, the Court considered that the aim of ensuring the observance of the minimum requirements of life in society could be considered as part of the protection of the rights and freedoms of others, and that the contested ban could be regarded as justified in its principle solely in so far as it sought to guarantee the conditions of “living together”.

Thirdly, the Court indicated that, by reason of their direct and continuous contact with the vital forces of their countries, the State authorities were in principle better placed than an international court to evaluate local needs and conditions. In matters of general policy, on which opinions within a democratic society could reasonably differ widely, the role of the domestic policy-maker was to be given special weight. With regard to Article 9 of the Convention, the State should thus, in principle, be afforded a wide margin of appreciation in deciding whether and to what extent a limitation of the right to manifest one’s religion or beliefs was “necessary”.

In the present case, the Belgian State had intended in adopting the contested provisions to respond to a practice that the State deemed incompatible, in Belgian society, with the ground rules of social communication and, more broadly, with the creation of the human relationships that were essential to life in society. The State was seeking to protect a principle of interaction between individuals that was, in its view, essential to the functioning of a democratic society. From this perspective, and similarly to the situation which had previously arisen in France (S.A.S. v. France), it seemed that the question whether or not it should be permitted to wear the full-face veil in public places constituted a choice of society. Furthermore, while it was true that the scope of the ban was broad, because all places accessible to the public were concerned, the contested provisions did not affect the freedom to wear in public any garment or item of clothing – with or without a religious connotation – which did not have the effect of concealing the face. Lastly, there was no consensus within the member States of the Council of Europe as to whether or not there should be a blanket ban on the wearing of the full-face veil in public places, which justified, in the Court’s opinion, leaving the respondent State significant room for manoeuvre (“a very large margin of appreciation”).

In consequence, the Court considered that the ban imposed by the joint by-law of the municipalities in the Vesdre police area could be regarded as proportionate to the aim pursued, namely the preservation of the conditions of “living together” as an element of the “protection of the rights and freedoms of others. It therefore held that the contested restriction could be regarded as “necessary” “in a democratic society” and concluded that there had been no violation of Articles 8 and 9 of the Convention.

The Court having found that the contested measure had an objective and reasonable justification for the reasons set out above, it held that there had been no violation of Article 14 of the Convention taken together with Articles 8 and 9.

The Conseil d’État had rejected Ms Dakir’s application on the grounds that it had been based solely on Article 113bis of the by-law, without referring to Article 113. The Court noted that Article 113 could be considered as a general provision and that Article 113bis represented a particular application of it; the municipalities in question had used Article 113bis in the by-law because they considered that Article 113 was insufficient to prohibit the wearing of the burqa. It also noted that the submissions on the merits made by Ms Dakir had been set out in a substantiated and structured manner and were of particular significance, and that they had been discussed in the context of the adversarial written proceedings before the Conseil d’État. In consequence, the Court considered that the decision by the Conseil d’État to declare the application inadmissible had been excessively formalistic and that Ms Dakir’s access to the Conseil d’État had been limited to such an extent that it had upset the fair balance that ought to be struck between, on the one hand, the legitimate concern to ensure that the formal procedure for appealing to courts was complied with and, on the other, the right of access to the courts. In consequence, it held that there had been a violation of Article 6 § 1 of the Convention.

The Court held that Belgium was to pay Ms Dakir 800 euros (EUR) in respect of costs and expenses.