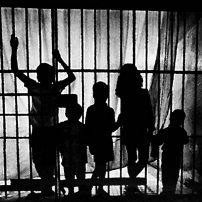 Unacceptable and humiliating treatment of unaccompanied minors by Greek state authorities and illegal deprivation of their liberty. Violations of Greece

The case concerned the placement of nine migrants, unaccompanied minors, in different police
stations in Greece, for periods ranging between 21 and 33 days. The migrants were subsequently
transferred to the Diavata reception centre and then to special facilities for minors.

The Court found, first, that the detention conditions to which the applicants had been subjected in
the various police stations represented degrading treatment, and explained that detention on those
premises could have caused them to feel isolated from the outside world, with potentially negative
consequences for their physical and moral well-being. The Court also held that the living conditions
in the Diavata centre, which had a safe zone for unaccompanied minors, had not exceeded the
threshold of seriousness required to engage Article 3. It further took the view that the applicants
had not had an effective remedy.

Secondly, the Court found that the applicants’ placement in border posts and police stations could
be regarded as a deprivation of liberty which was not lawful within the meaning of Article 5 § 1. The
Court also noted that the applicants had spent several weeks in police stations before the National
Service of Social Solidarity (“EKKA”) recommended their placement in reception centres for
unaccompanied minors; and that the public prosecutor at the Criminal Court, who was their
statutory guardian, had not put them in contact with a lawyer and had not lodged an appeal on their
behalf for the purpose of discontinuing their detention in the police stations in order to speed up
their transfer to the appropriate facilities

The applicants are six Syrian nationals, two Iraqi nationals and one Moroccan national who entered
Greece just before the signing of the migration agreement concluded in 2016 between the member
States of the European Union and Turkey, the “EU-Turkey Declaration”. They were seeking to travel
on to other European countries. They were between 14 and 17 years of age at the material time and
were unaccompanied.

On various dates they were placed under “protective custody” in police stations of northern Greece,
for periods of between 21 and 33 days. They complained about overcrowding in their cells, a lack of
heating, ventilation and lighting, and the poor quality of the food, adding that they had not been
allowed to go outside for a walk and that they had slept on the floor in dirty sheets. One of them
claimed to have suffered from asthma. They were subsequently transferred to the Diavata open
reception centre, which since April 2016 has had a safe zone for unaccompanied minors, and is run
by the NGO ARSIS. They were later taken to a special facility for unaccompanied minors.

The applicants complained about the conditions of their detention. The public prosecutor at the
Criminal Court shelved their complaint after questioning three adults who were held in the police
stations concerned. Two of the applicants also complained of ill-treatment at the Kilkis police
station. The criminal and disciplinary proceedings conducted in that connection were discontinued in
2017.

Article 3 (prohibition of torture and inhuman or degrading treatment)

The applicants’ detention in police stations: The Court found that the police stations had features
which could make detainees feel lonely (no outer courtyard for walks or physical exercise, no
catering facility, no radio or television for communication with the outside world) and were not
suited to lengthy periods of imprisonment. Thus detention on those premises was capable of
arousing in them a feeling of isolation from the outside world, with potentially negative consequences for their physical and moral well-being. The Court found that the applicants had been unable to go outside and that this situation was aggravated by the fact that they were all minors. It further pointed out that, in its report of 26 September 2017, the European Committee for the Prevention of Torture and Inhuman or Degrading Treatment or Punishment (CPT) had emphasised that the practice of detaining unaccompanied or separated minors, for “protective” purposes, for several days or even weeks, without any psychological or social assistance, was unacceptable.

Consequently, the Court took the view that the detention conditions to which the applicants had
been subjected in the various police stations could be regarded as degrading treatment and found
that there had been a violation of Article 3.

As regards the Diavata centre: The Court noted that this centre was an open facility where the
applicants could go in and out as they pleased. It also found that, between January 2015 and March
2016, the flow of migrants into Greece had created an unprecedented migratory and humanitarian
crisis, triggering a sudden increase in the demand for accommodation from asylum seekers and
unaccompanied minors. Thus the “safe zone” of the Diavata centre, which was run by an NGO, had
been set up in order to meet the needs of unaccompanied minors who had reached certain areas of
northern Greece. In that connection, the Court noted that in its submissions to the Court, the
UNHCR had not made any criticism of the “safe zones”, including that of Diavata. Consequently, the
living conditions in the Diavata centre had not exceeded the threshold of seriousness required to
engage Article 3 and there had been no violation of that provision.

As to the complaint of two applicants alleging ill-treatment at Kilkis police station, the Court took
the view that it was manifestly ill-founded because the applicants had not substantiated their
allegations by appropriate evidence. The medical certificate issued by the hospital concerning the
applicant who claimed to have broken his arm – after being kicked in the chest and falling over –
made no mention of his arm being in plaster. In addition, the neurologist and cardiologist who
examined him had indicated that he had no health problems. The doctor who had examined the
other applicant – who claimed to have been hit on the head – had found that he did not need any
treatment.

The Court took the view that the domestic remedy available3 , namely an appeal to the public
prosecutor, had not been an effective one, neither for the applicants’ transfer to the open facility of
the Diavata centre, nor for an examination of their complaints concerning the conditions of their
detention. The report drawn up in the domestic procedure4 had not mentioned, as required, the
date of the end of the “protective custody” period. Thus the applicants and the NGO which had been
helping them were not able to know the duration of the placement in order to report it to the public
prosecutor, and it had taken them several days to realise that this “protective custody” was being
prolonged beyond a reasonable time. Moreover, while the applicants had been transferred to
Diavata on the day after their complaint, it was thanks to the intervention of the NGO ARSIS. Lastly,
over six months after the applicants had filed a criminal complaint about the conditions of their
detention, the public prosecutor had shelved that complaint, after questioning three adults who had
been held in the same police stations. There had thus been a violation of Article 13, taken together
with Article 3.

Article 5 § 1 (right to liberty and security)

The Court found that the applicants’ placement in border posts and police stations could be
regarded as a deprivation of liberty. In that connection it noted that the authorities had
automatically applied Article 118 of Decree no. 141/1991 providing for “protective custody”.
However, that legislation had not been intended for unaccompanied minor migrants and did not provide for any time-limit, thus potentially leading to situations where the deprivation of liberty of
such minors could be prolonged for lengthy periods. This was all the more problematic as they were
detained in police stations, where the conditions were incompatible with lengthy periods of
imprisonment. In addition, the Court pointed out that Article 13 § 6 (b) of Decree no. 114/2010,
which transposed into Greek law Directive 2005/85/EC of the Council of the European Union,
provided that the authorities should avoid the detention of minors. Section 32 of Law no. 3907/2011
provided that unaccompanied minors could only be held as a last resort, for the shortest period
possible.

Lastly, Article 3 of the UN Convention on the Rights of the Child, of 1989, obliged States to
take into consideration the best interests of children in taking decisions concerning them. The Court
therefore took the view that the Government had failed to explain why the authorities had initially
placed the applicants in a number of police stations and in degrading conditions of detention and
not in other temporary accommodation facilities. It found that the applicants’ detention had not
been “lawful” within the meaning of Article 5 § 1 and that there had been a violation.

The Court was of the view that “protective custody” in police stations could last for long periods
during which the minors concerned could not be identified by lawyers working for NGOs in order to
bring, within a reasonable time, an appeal against what they regarded as a detention measure. The
applicants had spent several weeks in police stations before the National Service of Social Solidarity
(“EKKA”) recommended their placement in reception centres for unaccompanied minors. Moreover,
the public prosecutor at the Criminal Court of Kilkis, who was the applicants’ statutory guardian, had
not put them in contact with a lawyer and had not lodged an appeal on their behalf for the purpose
of discontinuing their detention in the police stations in order to speed up their transfer to the
appropriate facilities. Moreover, as they had not officially been given the status of detainee, the
applicants had been unable to bring – or take part in – a case before the Administrative Court in
order to challenge their detention. The Court consequently found that there had been a violation of

The Court held that Greece was to pay 4,000 euros (EUR) to each applicant in respect of nonpecuniary damage and EUR 1,500 to all the applicants jointly in respect of costs and expenses.