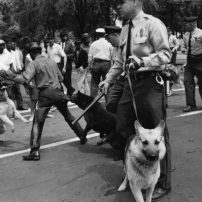 Mistreatment of detainees who tried to escape from the police. Condemnation for degrading treatment

Attempt to escape from prisons. The applicants had passed through an open door, climbed up a tall wall and jumped from the backyard. Allegations of police violence with wooden sticks and iron pipes during the capture, but also after his delivery to the police.

Infringement of the essential part of Article 3 with regard to the first and fourth applicants. The ECtHR found that these injuries were caused by ill-treatment brought by the applicants during the arrest, taking into account the forensic evidence, the nature of their injuries and their detailed and consistent testimonies. On the other hand, the Court was unable to conclude beyond reasonable doubt that recourse to physical violence by police officers was excessive, as they had resisted arrest while their injuries were secondary without long-lasting health consequences.

Moreover, the procedural part of Article 3 of the ECHR was infringed in respect of all the applicants, since the authorities did not conduct an independent, thorough and effective investigation of the incident.

The applicants, Giorgi Gablishvili, Romik Kasyanovi, Zurab Gachechiladze, and Giorgi Mtchedlidze,
are Georgian nationals who were born in 1988, 1982, 1984, and 1987 respectively. At the relevant
time they were serving their sentences in Rustavi Prison no. 1 (Georgia).

The case concerned the alleged ill-treatment of prisoners and the national authorities’ failure to
conduct an effective investigation in that regard.

On 30 March 2009 the applicants were arrested in a yard behind the prison during an alleged
attempt to flee. According to their submissions, they had left the confinement area through an open
door, climbed over a high wall and had jumped down into the back yard. There they were attacked
by prison officers who severely beat them with wooden sticks and iron pipes. After the arrest the
applicants were placed in a punishment cell, where their beating continued.

On the same day the Ministry of Prisons opened a criminal investigation into the circumstances of
the attempted escape. The investigator questioned the applicants, who blamed all of their injuries
on a fall from a prison wall. The investigator further commissioned an expert from the National
Forensic Bureau who concluded that the applicants’ injuries could have been caused by blows with
hard, blunt objects inflicted at the time of the attempted escape.

In court proceedings the applicants withdrew their initial statements and testified that they had
been ill-treated during their arrest. In December 2009 the Rustavi City Court convicted them of
attempting to escape from prison. The second and third applicants were also found guilty of resisting
prison officers in the exercise of their duties. All their appeals were rejected.

The applicants complained to the Chief Prosecutor of ill-treatment and requested the initiation of
criminal proceedings. The Ministry of Prisons interviewed the prison governor and four prison
officers who had been involved in the incident and all of them denied that the applicants had been
beaten.

On 20 August 2012 the prosecutor in charge of the case decided to discontinue the proceedings for
lack of evidence of a crime. He fully accepted the prison officers’ version of the events, concluding
that the applicants could have been injured when they had jumped down from the wall. The
applicants were not informed about the decision and only found out about it in 2014.

Relying on Article 3 (prohibition of inhuman or degrading treatment), the applicants complained that
they had been ill-treated by prison officers during their arrest after their attempt to escape from prison and immediately thereafter. They further alleged that the authorities had failed to conduct a
thorough, adequate, and independent investigation into their allegations of ill-treatment.

Violation of Article 3 (investigation) – in respect of all four applicants